Surprising?  Yes.
Not Surprising?  Not if you've been paying attention
Fucked up?  For sure.

What is known for sure is that R. Kelly has been accused of sexual relationships with minors going back to 1994, which leads me to the BIG question...

First, let's acknowledge that Jim DeRogatis broke the R Kelly story and has stuck with the story ever since.  The initial story by DeRo and Abdon Pallash was reported in the Chicago Sun-Times in December 2000.  Eighteen years ago.

Eighteen years ago!
That's how many years it takes to age out of R. Kelly's dating preference!

...and NOW some stuff seems to be getting done, though even DeRo - rightly so - has his doubts much will happen: 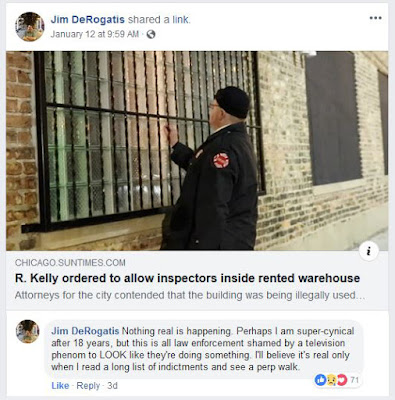 Unsurprising to me is how the Chicago news media ignores a major story that a competitor broke / has an exclusive.  From 1999-2004 I published a weekly online column on the Chicago news media.  I started it because after being away from Chicago for 5 years, I was stunned at how the local news media had deteriorated.  Others have suggested that I didn't know how bad it was before I left, but regardless, I was a voracious news consumer sad that Chicago news was getting bad.  By the time I ended the column in 2004, I pretty much resigned myself to the fact that Chicago journalism was weak (Overall - there were/are still some bright spots).

When the Sun-Times broke the R. Kelly story, EVERY Chicago news org, should have pounced and reported and kept the story going until the story ended.  But no.  It's much easier to use wire stories, PR releases and man-on-the-street opinions to fill the newshole.  It still happens today.  The TIF scam created by Richie Daley should have been killed years ago, but Ben Joravsky is apparently the only good journalist in town and the only one who can report the story in a clear and concise manner. Meantime, the R. Kelly story was here all along for the picking, but a cable TV channel known primarily for women-in-distress B-movies out scooped, out-reported and out-journo'd the Chicago news media.  Weak.

Here's a good summation of the story on Vox - a non-Chicago news site.
Posted by John Kuczaj at 8:00 AM